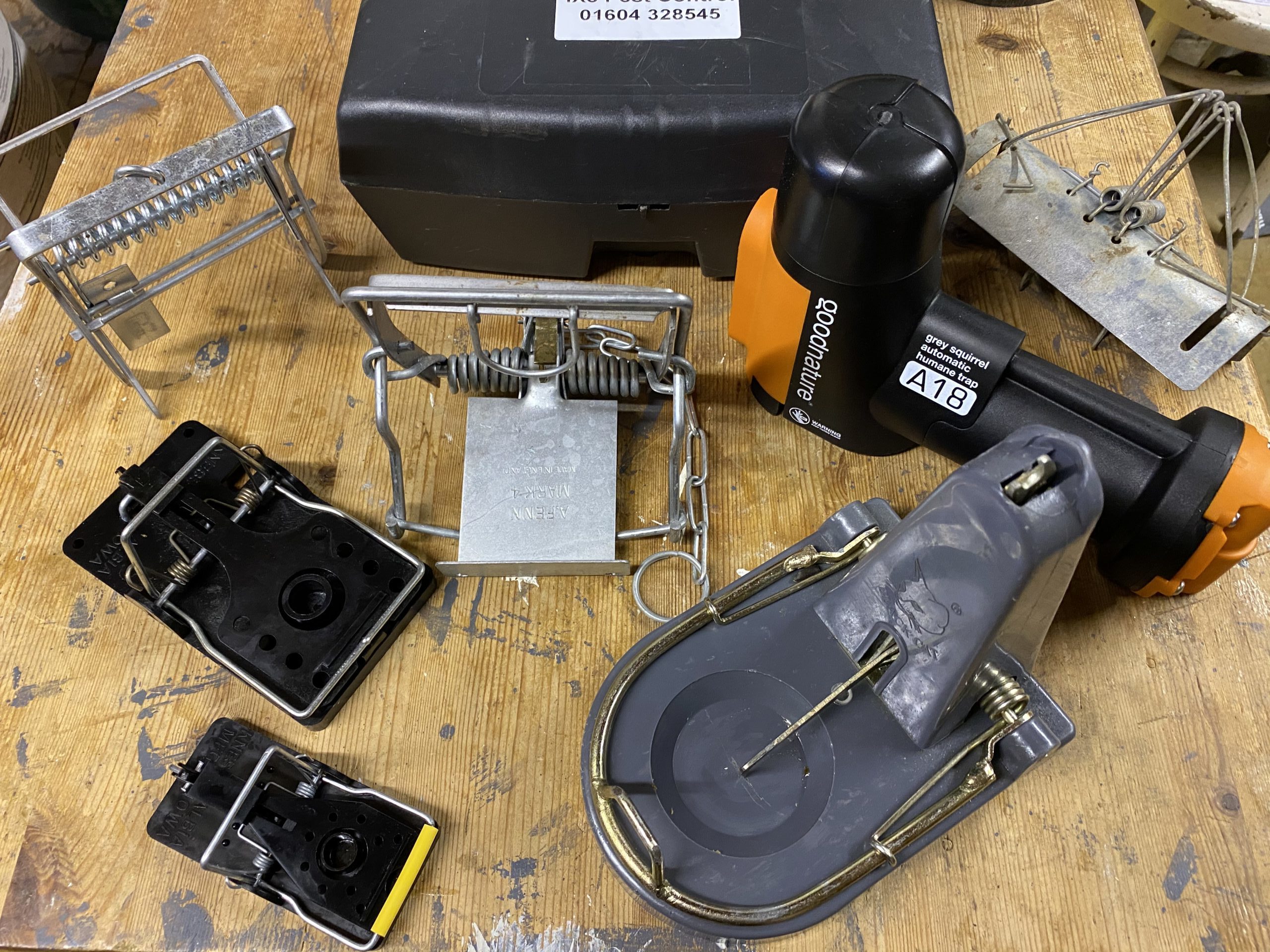 We often get asked which traps are the best pest control traps. The simple answer is that there are many different types of pest control traps and each serves its own purpose depending on various factors, such as the target pest species, the location of pest activity, the pests current food source, and whether the pests might be trap-shy for any reason.

Traps fall into two primary categories, live capture and instant kill traps. Both types require frequent checking, to minimise any potential harm or distress. It is actually illegal in England to capture and release certain animals, including rats and grey squirrels, so instant kill traps are often the preferred choice for these.

There are a wide range of different traps approved for different pest species, whether this is for mice, rats, squirrels, rabbits, foxes, moles, or others. The pictures show a small selection of some of the most common traps used in pest control, including:

The primary consideration is that whatever trap is being considered, it must be approved for the particular target pest species.

If an incorrect or unapproved trap is used it might cause unnecessary pain and suffering to the target species or it may be activated by a non-target species and this should be avoided.

As with all pest activity a full survey should be undertaken as this will identify critical factors to consider when working out a trapping strategy. Consideration must be given to whether non-target species, children, pets or others might be at risk from any traps placed. Some traps work better in different locations too. For example a Fenn trap might be used in a burrow or run, where a Black Cat trap might be totally unsuitable. Some traps might also not fit into a confined space where others might work well.

It is also important to consider whether a trap should be fitted into a cage or run, or whether it is safe or effective to be used in an unenclosed environment.

Once the trapping locations have been identified, it is important that the chosen traps are set in the right way to encourage the target species to take the bait and trigger the trap. Incorrect setting can result in traps being triggered but no catch, or alternatively, a mis-catch. Knowledge of how and where to set traps only comes with training and experience, and this is often where DIY trapping might be unsuccessful.

Where inappropriate traps have been used, or traps have not been set correctly, this can encourage target pests to become trap shy or bait shy. This can present problems and is particularly common where people have tried unsuccessfully to resolve their own pest problems rather than calling in the professionals from the outset. There are techniques that can be used to work around this but it usually takes a little longer than trapping non-trap-shy target species.

Technology is increasingly being used in pest control in the same way it is being developed in other areas, and even traditional pest control trapping techniques are subject to this technological revolution. It is possible to now get traps which send remote notification via wifi, GSM or 4G when they are triggered, and this technology is improving rapidly.

From the brief information here, readers may realise that there are many factors which determine the right pest control traps to use in any given situation and this is why we always recommend you use the services of a competent pest controller to ensure swift and effective action can be taken to resolve unwanted pest activity.

If you require assistance or advice on any pest matter, please contact us here or call us on 01604 328545