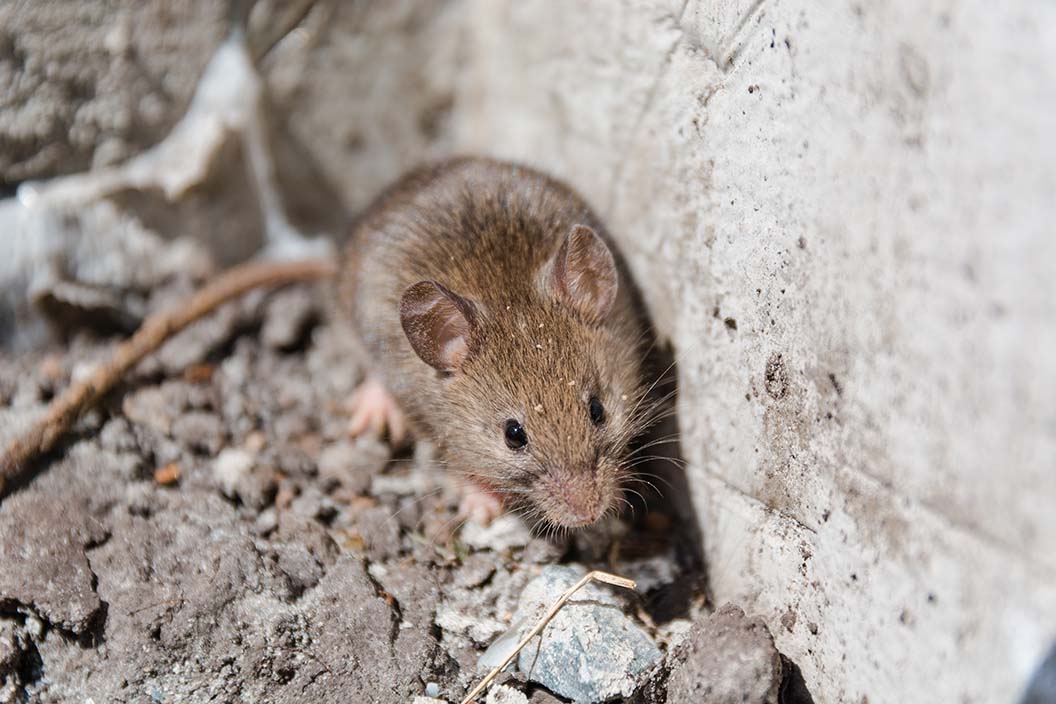 Posted on March 3, 2022No Comments on Mouse Pest Control in Silverstone

When we arrived at the property, the mouse in question had been disposed of but, from the description we determined that it was a house mouse. The homeowner was right to call us out, as when you have one mouse you can very quickly have a major problem as mice breed fast! A female house mouse will give birth to a litter of 3-14 young at a time.

We had a good look around and spotted that there was minor evidence of mouse faeces on the floor and, oddly quite a lot on the pool table that was in the garage. There was also a very neat hole in the garage personnel door sealant which looked like the entry point for the little invader. It is very unusual for a mouse to chew their way into a building in that manner as they are mostly opportunistic and will pop in through small holes and gaps that they see.

Now, you might think that mouse faeces on the pool table is odd, but I was told that the homeowner had stored some boxes on that table over the Christmas period and mice like nothing more than a cosy warm box to nestle in. They can also climb up pretty much sheer walls so even boxes stored in the rafters aren’t safe from them and certainly the legs of the pool table would pose no problems at all. They can also jump very impressively.

Given the relatively small amounts of faeces, we were confident we weren’t looking at a major infestation, but we did need to check so we laid 8 traps around the perimeter of the garage in areas that would be common for a mouse to traverse. The traps contained laced peanut butter, if you put traps down and mice are present, it is pretty much guaranteed that they will be found.

We returned 5 days later and none of the traps had been sprung. We then went back a week later, really not expecting to see anything. Typically, if there is no evidence after the first visit, it is very rare to find anything on a subsequent visit. As expected, there was no evidence of other mice in the garage.

As we always do, we inspected the garage for entry points and made some preventative recommendations which included advising that the homeowner installs seals under the garage doors and to fill in some small holes in the garage wall which were home to electric cables. Mice can get into a property through gaps as small as 6mm or the thickness of a pencil. Clearly the initial entry point needed to be filled too.

As it turned out this was a simple job with no further infestation other than the one adventurous and hungry mouse. What matters, though, is that the homeowner’s mind is put at rest that her garage is a confirmed mouse free zone and with these preventative measures in place, should remain that way. The client says:

“Thanks for coming out so quickly and thank you for giving me some peace of mind that we weren’t overrun with mice! I found the service very professional, extremely thorough and I particularly liked how Matt explained everything to us and gave us advice on how to stop mice from getting into the garage. I would definitely recommend the service from iX5.”

If you have concerns about mouse activity in your home, or indeed any other form of pests we would be delighted to help. We provide an efficient, friendly pest control service in and around Northampton, Daventry, Towcester, Wellingborough, Kettering, Olney, Rugby, Market Harborough and the surrounding areas and villages. You can call us on 01604 328545 or email [email protected] or complete this short form and we will get back to you as soon as we can.