Whilst moles appear sweet and gentle to some, moles, molehills and tunnels cause significant issues for property owners and farmers. It is for these reasons that mole pest control is important.

The tunnels can collapse resulting in accidents and injury to people or animals, whilst the earth mounds (molehills) they create can damage farm machinery when stones are present or cause crop contamination, damage or decay, in addition to increasing weed growth and deterioration of pasture land.

European moles are silver-grey to black in colour and weigh 75-100 grams. They are found throughout mainland Britain and some islands, but not in Ireland. They mate twice a year and have litters of between 2 and 7. Their lifespan is around 3 years. Moles do not hibernate and are active all year round.

Moles have a very well-developed sense of smell and using scent glands beneath the skin which are connected to the bladder. They mark tunnels with urine and the scent glands help identify occupied tunnels. This is also how they identify the sex of other moles in the breeding season (March to June). Moles have eyes hidden in fur but their vision is of little use and is primarily used to identify light or dark. They have excellent hearing and this helps identify food, predators or other moles.

Moles are Creatures of Routine

Moles generally live solitary lives in their system of tunnels. They can dig up to 10 metres an hour and generally live in an area of around 3 to 4 acres. The tunnels they create also help to provide their food source. Moles primarily live on earth worms although they do eat other invertebrates too. Earthworms and other insects drop into the tunnels and this is where the moles collect them up. Moles are creatures of routine as they feed and sleep in 4 hour blocks. Every 4 hours moles will patrol their tunnels collecting up worms and other food they find in the tunnels. They take these back to the larger molehills which are known as ‘fortresses’ and store them until they wish to eat them. Worms are immobilised before being stored!

Moles found above ground are usually that years young who are leaving the mother and travelling off to search for a new home.

There are two main methods of mole control, gassing and trapping. Gassing is rarely used due to the inherent risks. Trapping requires accurate identification of the tunnel runs so these can be opened up and traps can be fitted. There are a range of traps that can be used. Due to the routine behaviour of moles, trapping is usually very effective.

If you need advice or assistance with mole pest control or any other pest activity, then please contact us here or call on 01604 328545 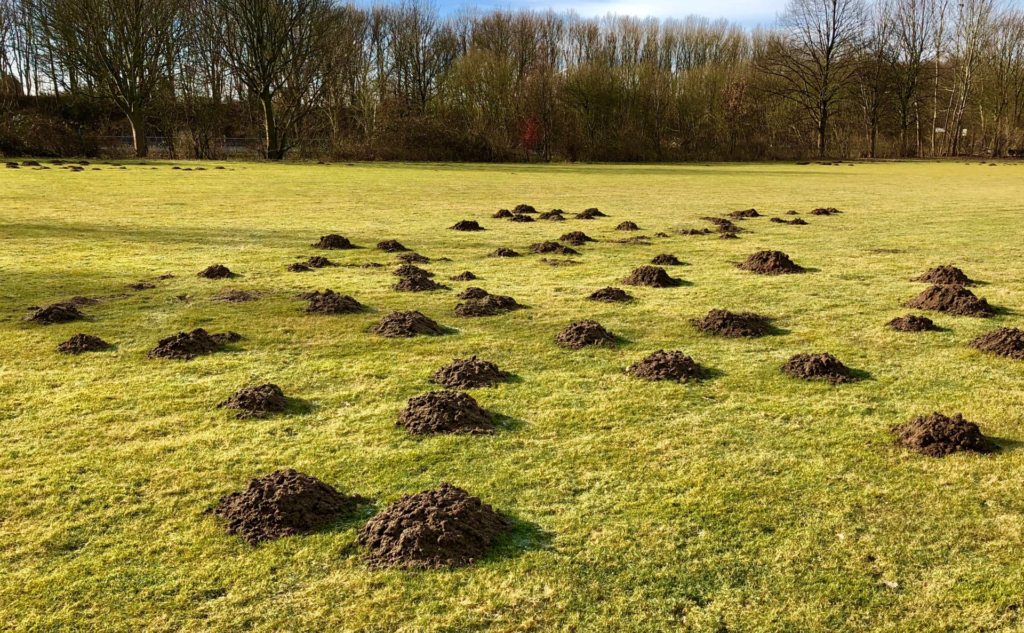