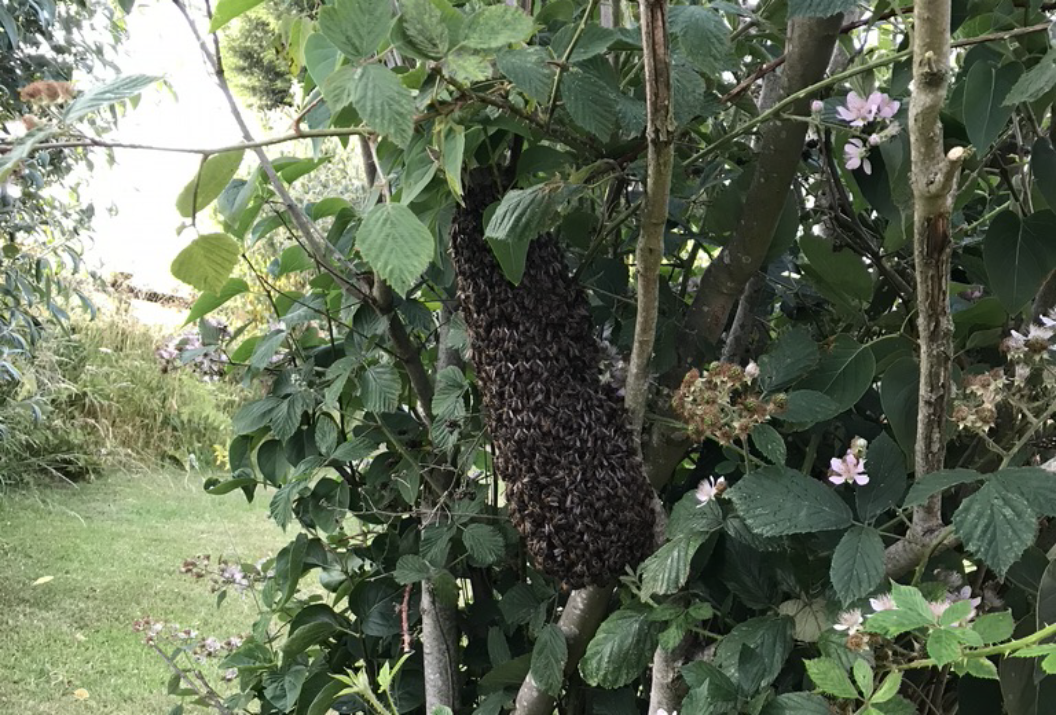 This week we had a call to attend a honey bee swarm that had taken up residence in a bush in a garden in Guilsborough, Northamptonshire.

When you look at this first picture you can see why the homeowner called us. Luckily, the swarm was at a low level, so our bee expert Matt found them easy to access. Recently Matt has had to scale a tall chimney stack in order to do his job, this time at least he got to keep his feet on the ground.

Matt placed a sheet under the swarm to catch any bees that fell, then trimmed a few small branches to enable freer access. Placing a poly nuc, which is a small polystyrene hive box, under the bees and gently shaking the branch Matt managed to “knock” them into their temporary hive. Most of the bees fell into the nuc, although some did start to fly. This process works based on probability, Matt knows if he gets the queen into the nuc, then gradually the ‘flyers’ and any others will join the queen and the rest of the colony there too.

Matt waited patiently for the flyers and others to work their way into the nuc.

With Honey Bees, Timing Is Everything!

Timing plays a big part in a successful honey bee rescue. As it was dusk, the bees wanted to join the rest of the colony fairly quickly. If it had been earlier in the day, Matt would have left the nuc on site and returned to collect it at dusk. From start to finish the rescue took around 45 minutes to complete.

All in all a successful rescue! We will monitor the colony for a week or so before gifting the hive to a new beekeeper, as currently all our hives are full.

What To Do If You Have A Swarm In Your Garden

We recommend you don’t just ignore bee swarms, as they could take up residence in a chimney or wall cavity, and that is a whole other blog (and can be a rather complex and expensive process to remove them!) If you have a swarm of honey bees in your garden, then give us a call on 01604 328545 we will rescue them and find them a new home.